When he explains how he and Leslie H. Wexner developed the fields of New Albany into a growing city filled with million-dollar homes and a vast business park, Jack Kessler makes it sounds simple.

The power couple — Wexner is the founder of L Brands, Kessler is a developer who joined Wexner to form the New Albany Co. — began spending their weekends driving the perimeter of Columbus, scouting locations. Muirfield looked promising; so did Gahanna.

“Les said, ‘Gahanna is great, but we can’t do much to change it. It’s already built. New Albany, we can change,’ ” Kessler said.

They have indeed changed New Albany, turning it into a Shangri-La for the wealthy and a home for scores of businesses.

And now, say Kessler and William Ebbing, president of the New Albany Co., it’s time for the next phase of the project: an expansion of the city’s center. The goal is more restaurants and retail, and to better connect the heart of the city to the nearby homes and business park.

“The core is critical to our future, to further the economic development of the business park,” Ebbing said. “How do we attract the young professionals and take the business park to the next level?”

Building an urbanlike core in a suburban setting is the goal of several communities in central Ohio and beyond. Dublin’s mixed-use Bridge Street Project is another example.

These are called “edge cities” and are becoming more common, said Bernadette Hanlon, a professor of urban planning at Ohio State University’s Knowlton School of Architecture. “There’s this sense, this desire to create more walkable spaces out in the suburbs,” she said.

While New Albany is not unique in this goal, “In terms of privatization, it is pretty unique,” Hanlon said. There aren’t too many other communities created by two men. 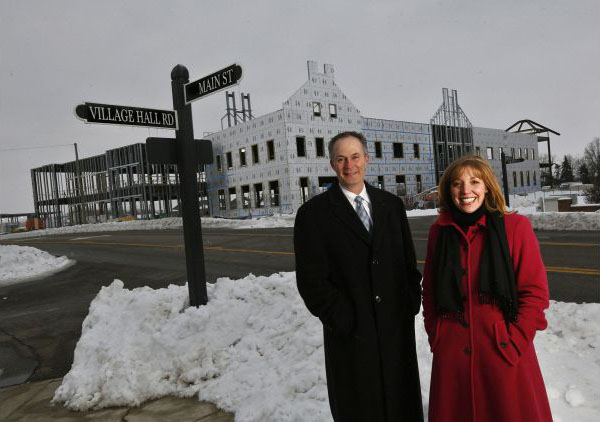 New projects planned in New Albany at or near the intersection of Market and Main streets include:

• The $6 million Market & Main building, a 27,000-square-foot office building that will include a restaurant and retail tenants on the first floor. It is a joint venture of the New Albany Co. and the Daimler Group, another local developer.

• Strait’s Farm, a 51-home, $24 million residential development designed for homeowners looking to downsize and be closer to the city center. M/I Homes will develop the project on land purchased from the New Albany Co.

• A $3 million roundabout at Market and Main streets, designed to spur commercial growth.

All five projects are under construction and are expected to be completed by the end of the year.

These improvements will come too late for the Johnson’s Real Ice Cream shop on Market Street. The franchisee in the Market Square complex closed the shop about a year ago, said Matt Wilcoxon, vice president of sales of the Bexley-based company.

“The traffic pattern wasn’t enough,” Wilcoxon said. “I always felt there weren’t enough draws, other than the Starbucks and Rusty Bucket (in Market Square), to get people there. … If they get more food-based shops and restaurants in, that will make it a destination.”

The new projects are designed to develop “critical mass,” said Courtney Orr, executive director of the New Albany Chamber of Commerce. “What’s special here is this is a growing community.”

Wexner and Kessler formed the New Albany Co. in 1986 and began buying large lots of land for a project initially dubbed Wexley.

The New Albany Co. purchased more than 300 lots, Kessler said, dividing several into 1,800 smaller parcels for homes. About 1,400 Georgian-styled homes that have met specific design requirements have been built to date.

Wexner and Kessler built their own homes in New Albany.

“We started selling lots to our friends, and we identified people we thought were leaders,” Kessler said. “We got Bobby Rahal and John G. McCoy to live here.”

Rahal is a past Indianapolis 500 winner, and McCoy was the CEO of the former Banc One Corp., now part of JPMorgan Chase. Rahal’s home was built in 1995 and recently sold for $2.25 million.

“Then, we had to fix the school system,” Kessler said. “Then we were worried about taxes, so we started a business park.” They also built a golf course, designed by Jack Nicklaus, as well as a country club and an arts center.

The success of the company’s New Albany Business Park has fueled the city’s continued growth.

The business park generated $460 in tax revenues in 1997, the year it opened. The 2013 total was $11.6 million, money that is used in part to pay for the city’s schools and infrastructure improvements.

The 3,000-acre park in Franklin and Licking counties is home to companies such as Abercrombie & Fitch, Discover, Bob Evans Farms and Accel. There are 12,000 employees, Chrysler said, adding that 3,000 acres remain available for development.

The Beauty & Personal Care Campus on the eastern edge of the business park has been the biggest addition in recent years. Beauty and health-care products are manufactured, packaged and shipped from the 1.4 million-square-foot facility, which includes about 10 companies and 1,500 employees.

“We very much tout ourselves as a community for entrepreneurs started by an entrepreneur,” Chrysler said of Wexner.

The city has attracted successful entrepreneurs and executives.

The national and Franklin County median household incomes are $50,700 and $53,046 respectively, he said, according to statistics compiled from the American Community Survey. The New Albany median income is $161,314.

New Albany seems poised for growth. In addition to the additional acreage in its business park, the New Albany Co. has about 400 empty lots available for homes.

“Because of the land costs and the architectural requirements, you can’t build one for under $400,000,” Kessler said.

The New Albany Co. owns an additional 40 undeveloped acres in the city center that Ebbing said will “be developed in a mixed-use way, with more of a focus on restaurants and medical services and other retail opportunities.”

The success and continued growth of New Albany is due in large part to the vision and entrepreneurial spirit of its founders, he said.

“Les is a visionary, and his image of what this community should be has allowed us to get here,” Ebbing said.

By Steve Wartenberg, The Columbus Dispatch