(New Albany, Ohio) January 10, 2022 – The New Albany Company has appointed its legal counsel Molly Iams as its first General Counsel. In this role, Iams is responsible for overseeing all company legal matters, including developing and negotiating real estate agreements for land sales and acquisitions, development agreements, leases, and real estate covenant and restrictions.

With more than 15 years of experience in real estate transactions, Iams earned her Juris Doctor (J.D.) degree from the William and Mary School of Law and a Bachelor of Arts with distinction from the University of Virginia. 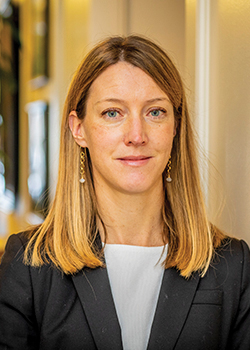 “The New Albany International Business Park has experienced unprecedented growth in the last decade, attracting more than $6 billion in private investment to date. Molly’s expertise is critical in our ability to support the growth of new and existing companies in the business park and to continue to be responsive to the companies,” said Bill Ebbing, President and CEO of The New Albany Company. “Momentum remains strong so we are pleased that Molly has joined us as general counsel.”

“It is an honor to represent The New Albany Company and support its commitment to high quality, master-planned development,” said Molly Iams. “New Albany is experiencing unprecedented economic growth, which is a testament to market demand, particularly in the Business Park.”

About The New Albany Company

Established in 1987 as a private partnership, The New Albany Company is the primary developer of New Albany, a nationally recognized strategically-planned community in Central Ohio encompassing more than 17 square miles that features a vibrant town center and cultural district, a country club community and a burgeoning business park.  In collaboration with civic leadership, The New Albany Company has spearheaded the growth and development of The New Albany International Business Park, one of the largest and fastest growing business parks in the country and home to several Fortune 100 companies representing more than $6 billion in private investment.