“Collaboration has been the key to success in New Albany.  JobsOhio, OneColumbus, the City of New Albany and New Albany Company, as well as additional partners such as American Electric Power, have worked together to attract global companies to the state and region that have generated thousands of construction
and permanent jobs.” 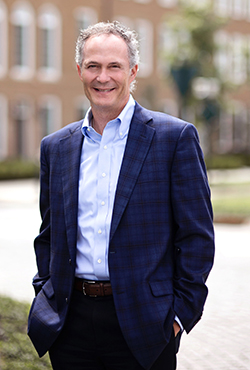 Bill Ebbing is the President and CEO of The New Albany Company. In this capacity, Ebbing oversees the development company’s holdings. The New Albany Company was founded 35 years ago by retail visionary, Leslie Wexner. In collaboration with civic leadership, The New Albany Company has spearheaded the development of thousands of acres in the northeast quadrant of Franklin County and western Licking County, including an upscale country club community, a premier 10,000 acre business park with $8 billion in private investment, a town center with retail, office and civic uses, and other mixed-use projects in central Ohio. New Albany has received national recognition for its innovative planning philosophies that have helped reshape the manner in which development is approached, serving as a model for strategic planning and development worldwide.

Most recently, global semiconductor manufacturer, Intel selected the New Albany International Business Park as the location of two new fabrication plants. The initial phase of Intel’s growth is expected to produce 7,000 construction jobs, 3,000 permanent jobs and $20 billion in investment in the area. Construction began in summer 2022 and operations are planned to start in 2025.

Before joining The New Albany Company, Ebbing directed a number of high-profile, successful projects as Vice President of Real Estate for Columbus-based Edwards Land Company. Among those projects were Tuttle Crossing and the redevelopment of Columbus’ historic Brewery District. The $80 million Brewery District project features a trendy mix of residential condominiums, restaurants and office space. Ebbing helped forge successful partnerships including architects, city officials and local and national historic preservation organizations that resulted in one of Columbus’ most vibrant urban destinations.

After graduating from Miami University (Ohio), Ebbing began his career at Bohm-NBBJ as a project architect. He is active in many service organizations that improve the quality of life in central Ohio. He has served as the northeast area chairperson for the United Way campaign of Franklin County and also was a member of the board of trustees. Previous board service includes Creative Housing, and The Jeanne B. McCoy Community Center for the Arts. He currently serves as a board member of The New Albany Community Foundation, Ohio Dominican University, Union Village, The Orthopedic Foundation and The Ohio State University Fisher College of Business. Ebbing is an 11-year rider in Pelotonia, the grassroots cycling event that raises funds to support cancer research.

Ebbing was selected for the Midwest Commercial Real Estate Hall of Fame in 2020 and was a 2018 honoree ofthe Columbus Business First C-Suite Awards as a most-admired executive. Ebbing was also selected as a Forty Under 40 honoree and was named to the Columbus Business First Power 100 list numerous times for his role as an influential executive leader with an impact on the region.

Bill and his wife, Tami, reside in New Albany and have two adult children.