“Places of value stand out among all places in the world. They’re recognizable. They leave a mark and an imprint in the memory. And that difference makes all the difference.”
— Jaquelin T. Robertson 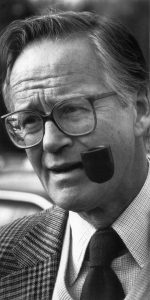 New Albany’s distinctive architectural identity is the result of a shared vision. One of the authors of that vision is Jaquelin T. Robertson (1933–2020), a world-renowned architect and planner who, during his half-century-long career, helped America rediscover its own architectural heritage.

Mr. Robertson, known as “Jaque” (pronounced “Jack”), first began consulting for the New Albany Company in 1989. Having recently completed an eight-year tenure as dean of the University of Virginia School of Architecture, he and his New York City-based firm, Cooper Robertson, left an indelible mark on the community. Mr. Robertson led the design of the clubhouse at New Albany Country Club as well as Bottomley Crescent, one of the first streets to open in the Country Club Community. Mr. Robertson also helped craft the community’s master plan, working closely with Les Wexner and Jack Kessler, along with other expert planners such as Gerald McCue and Laurie Olin.

To ensure a consistently high quality of design throughout the community, Mr. Robertson helped train local builders and architects in the art of traditional brick construction. He also wrote some of the design guidelines for the Country Club Community, emphasizing harmonious composition and authentic details in the Georgian style. Mr. Robertson’s knowledge and guidance subsequently informed other architects’ designs for the community learning campus, the New Albany Branch Library, and Village Hall. As the community’s business park began to develop in the late 1990s, Mr. Robertson helped the New Albany Company create appropriate architecture and planning standards so that the commercial buildings would respect the landscape and the scale of the community.

Jaque Robertson grew up in Windsor Farms, Virginia, a graceful residential community on the edge of Richmond. Recalling a typical English village surrounding a common green, it served as one of several key precedents for the planning of New Albany. Mr. Robertson’s love of architecture was fueled by his family’s Georgian-Palladian home, called Milburne, which was designed by master architect William Lawrence Bottomley—the namesake of New Albany’s Bottomley Crescent. Mr. Robertson also spent part of his childhood in Beijing, where is father, the diplomat Walter Robertson, was stationed. This cosmopolitan environment helped fuel Mr. Robertson’s lifelong interest in urban design as a complement of architecture. Each individual building, he believed, should feel connected to the larger community. The parts should form a whole.

Mr. Robertson earned two degrees from Yale and studied at Oxford University as a Rhodes Scholar. In the early 1960s he worked for prestigious New York architect Edward Larrabee Barnes. He then became a senior urban planner in the administration of New York City Mayor John Lindsay, and took on international planning and design projects in the private sector. Returning to his native Virginia in 1980, Mr. Robertson led the architecture school at UVA, where he looked with fresh eyes upon the Classical tradition in architecture. He believed that Renaissance Italy and Georgian Britain and America still offered relevant lessons. His thinking was encapsulated in his treatise, In Search of an American Urban Order, in which he sought to apply Thomas Jefferson’s architectural principles to the challenges of modern life.

When Mr. Robertson came to New Albany, he was impressed with Wexner and Kessler’s vision to build a timeless American community. “To come upon this crowd in New Albany was just such a shock,” he recalled in 2015, during a Jefferson Series panel event at The McCoy. “Les was so committed to quality, and you don’t get that in our world anymore. No one in the country was doing things this way. It was so rare and so incredibly brave.”

Mr. Robertson showed Wexner and Kessler around some of his favorite buildings and communities, from Monticello to East Hampton, New York. When Wexner chartered a flight for roughly 45 Central Ohio builders and architects to go to Richmond for the day, Mr. Robertson led them on a tour of the city’s handsome Georgian homes. They returned with a clearer understanding of the subtle language of brick: specialized bonds or patterns, “grapevine” mortar joints, water tables, arched openings, glazed headers, decorative “rubbed” bricks, and many other techniques.

As Mr. Robertson once said in a Town & Country interview, “The symbolic hard currency of architecture is classical. It’s gold in the bank. The other stuff is leveraged buyouts and soybean futures.”

Apart from his work in New Albany, Mr. Robertson is remembered for his role in designing civic and university buildings, museums, corporate headquarters, club/resort environments, and community master plans. He also designed elegant country homes for prominent clients, typically evoking the spirit of older buildings without imitating them directly. He received the Thomas Jefferson Medal in Architecture in 1998 and the Driehaus Prize, an award for excellence in traditional architecture, in 2007.

New Albany honors the memory of Mr. Robertson, and we treasure his enduring contributions to our community.